“She’s Funny That Way” is sold by Red Granite, the studio behind “The Wolf of Wall Street“.

Just like other piracy cases in the past, the defendants for these lawsuits were identified by their IP addresses.

The producer and Clarius Capital Group, which holds domestic rights of the film, are determined to bring the lawsuits to international territories, such as Europe, Asia, and the U.S. 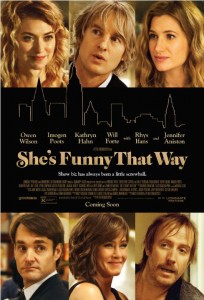 This 2015 comedy is starred by Owen Wilson and Jennifer Aniston. It’s written and directed by Peter Bogdanovich, and the story revolves around a playwright who experiences a love-triangle dilemma with her wife and ex-lover while in the middle of a production. Other cast include Imogen Poots, Illeana Douglas, Kathryn Hahn, Will Forte, and Rhys Ifans.

STTN has so far filed 5 She’s Funny That Way lawsuits in Illinois this month. The firm is represented by Michael Hierl, a Chicago attorney who has also spearheaded different copyright cases in the past, such as those related to the films “Dallas Buyers Club” and “The Cobbler”. According to a reliable source, below is the list of lawsuits that STTN filed in the District Court of Illinois: